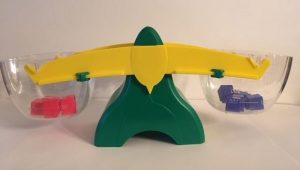 Brainstorm words/verbs that indicate a joining or additive process is taking place.  Make a chart in the room which can be referred and added to as you explore new problems.  Here are some ideas:  come, join, find/found, given, buy/bought, received, ran in, walked in, flew in, earned, cooked, put, etc.

Be careful about teaching “key word” strategies such as “Add if the question asks how many in all.” Children are likely to only see this type of question in a result unknown structure, but not in a change unknown or start unknown model. Even consider the part-part-whole model above. The second questions asks, “How many are green?” Would the child add 5 + 9 together when they should be thinking of what goes with 5 to make 9 or performing a subtraction operation?   If we are strictly teaching kids to just look at the question, then they are often missing the content of the story and lose sight of how the story starts and the change shown in the story.  Again, I made all of these same mistakes . . . just helping you see the light too!!

FREEBIE:  Go to one of my favorite math resources on TPT (math coachs corner – Donna Boucher) or www.mathcoachscorner.com.  She has some good activities on this topic.

I will focus on the subtraction side of problem solving next time with these structures:  Separate, Comparison. and Part-Part-Whole