Last week’s focus was on using ten frames to help with students’ number sense and conceptual development of number bonds for amounts 1-10. 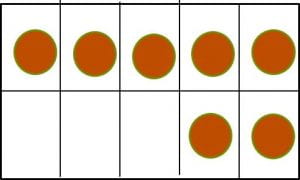 This post will feature ways to use ten frames to enhance students’ understanding of addition and subtraction. Look for freebies and a video!

There are many addition and subtraction strategies to help students memorize the basic facts such as these below. The ten frame is a very good tool for students of all grade levels to make these strategies more concrete and visual. I will focus on some of these today.

Doubles and near doubles (doubles +1, -1, +2, or -2): If the doubles are memorized, then problems near doubles can be solved strategically. Facts of 10: These are important to grasp for higher level addition / subtraction problems as well as rounding concepts.

Make a Ten: This strategy builds on the above (facts of 10) to help with problems with sums between 10 and 20. Students should readily be able to solve a problem such as 10 + 4 mentally first. Continued practice with these strategies:

Please prove that you are not a robot.

Powered by WordPress | Hosted by Edublogs | Protected by CloudFlare