This is the last part of number operations dealing with decimals: multiplication and division in a concrete and pictorial method. This is actually not part of the KG-5th grade OAS standards, but it is addressed in 6th grade and for those of you utilizing the CCSS, you will find multiplication and division with decimals starts in 5th grade.  Or you may have advanced students who are ready to explore this concept. There are a couple of freebies included in this post. Read on to find them!

Typically we teach our students that when you multiply 2 numbers together, the product is larger than the 2 factors. And when we divide two numbers, the quotient is smaller than the dividend.

Be careful about stating this generalization: This remains true when multiplying whole numbers (or even a combination of whole and decimal such as 5.2 x 6.4 = 33.28 in which the product is larger than either factor), but NOT with decimals or fractions less than 1 (example: .7 x .2 = .14 in which .14 is less than either factor .7 or .2). With division of decimals less than 1, the answer is often a whole number larger than either the divisor or the dividend (such as 5 divided by 1/2 = 10). This is a difficult concept, but modeling and practicing with concrete and pictorial models helps to see the reasoning. So, be careful not to say, “When you multiply two numbers together you always get a bigger number.” because it’s not always true. 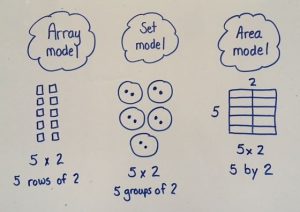 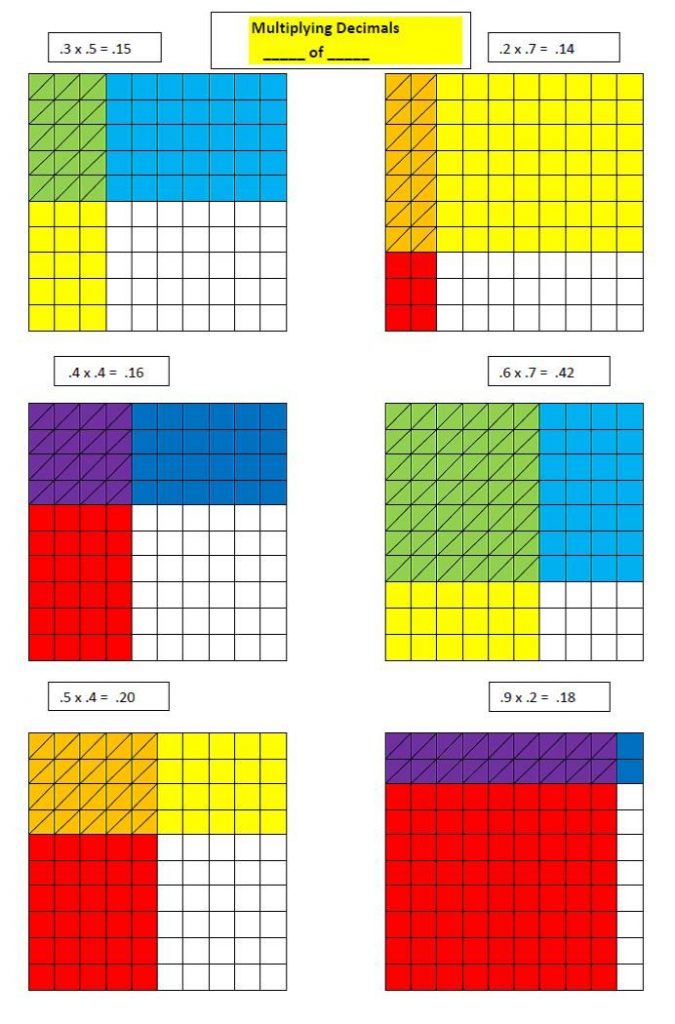 With decimals less than 1, however, this symbol could best be replaced with the word “of.”  With the problem .5 x .2 the phrase “5/10 of 2/10″ is a more accurate description of the operation, because we are trying to find a part of a part, not a part of a whole.  Here are some illustrations to show moving from whole number x whole number, to whole number x decimal, to decimal x decimal. Using real base ten pieces would provide good concrete understanding, then moving to drawings, before moving to the abstract algorithm. Notice in these examples, the product is less than one or both of the factors.

Click here for a free pdf copy of the colored Multiplying decimals model.

Another resource is at a fellow math coach’s site (www.mathcoachscorner.com). Click here. She has a free resource for helping students estimate where a decimal would belong, which helps them predict a reasonable answer. Example:  Where would the decimals belong in the answer for 60.2 x 3.18?  191436    Since 60 x 3 = 180, we should reason that the answer would be 191.436 because we know the answer would be slightly larger than 180, but not over 1000. 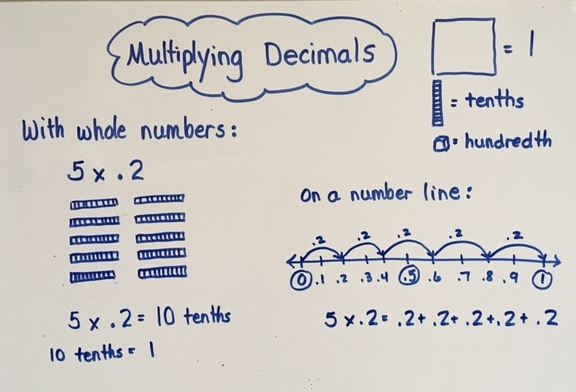 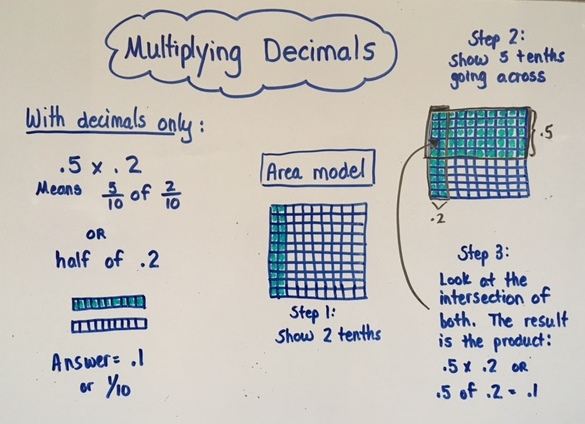 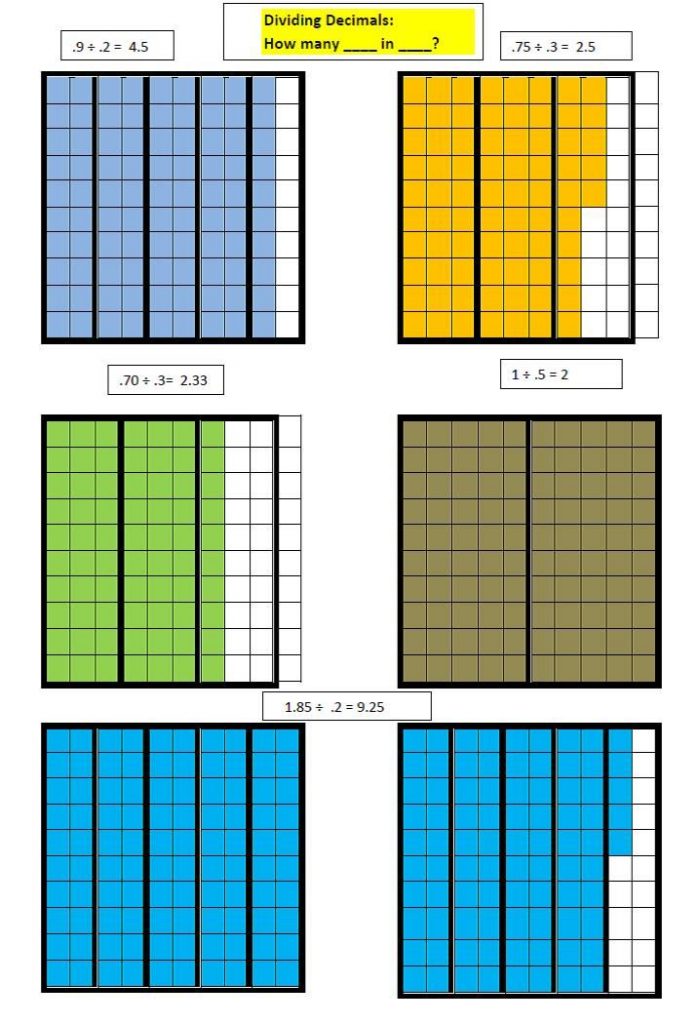 Think of this in terms of “How many ____ are in _____?” instead of the typical “_____ divided by ____.” Use pattern blocks to start with and relate to fractions.  For example, using hexagons for the wholes and trapezoids for the halves, pose this problem (5 divided by 1/2) this way:  “How many halves are in 5?”  Students will quickly see that 10 trapezoids (halves) cover 5 hexagons. They will gain much more understanding of the division of fractions / decimals concept than by telling them to invert and multiply. Then try: 5 divided by 1/6. Using the pattern blocks, cover 5 hexagons with green triangles (1/6). They will discover there are 30 sixths in 5 (or 5 divided by 1/6 = 30).

Using base ten and hundred grids you can likewise show division with decimals. Here are some pictorial models for division of decimals and fractions. Click here for a free pdf copy of the colored Dividing decimals model. 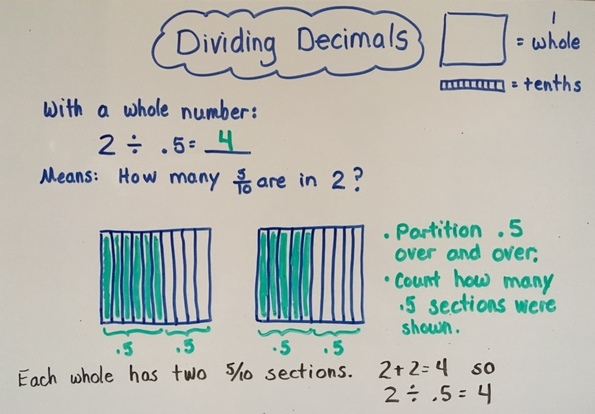 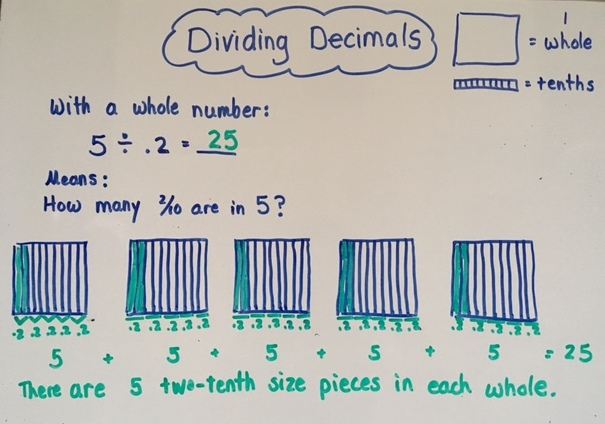 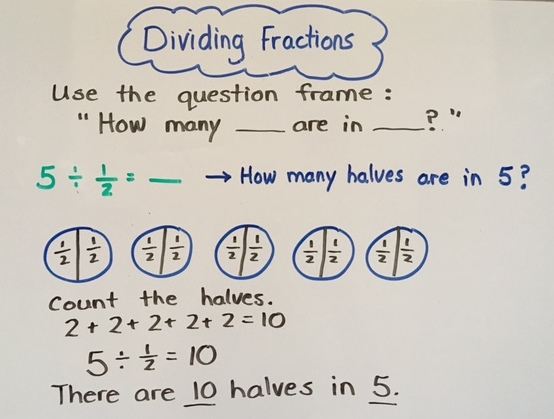 Pizza example: How many halves are in 5? 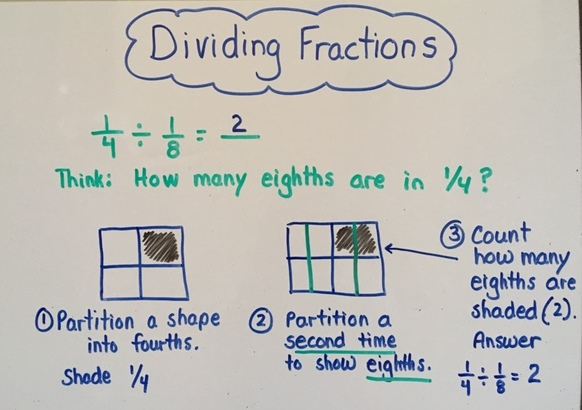 I hope these concrete and pictorial methods will help your students think conceptually about multiplication and division of decimals. With lots of hands on practice using 100 grids, fraction pieces, and drawings students will then more readily understand and see the rationale for the standard algorithms for these operations.