This is part 5 of a series of fractions posts. Thanks for sticking around! Through explorations with fraction manipulatives, pictures, and drawings, we hope students begin to notice there may be different ways to express the same area using fractional terms. To cut a sandwich into halves and eat one of the halves is the same as cutting the same sandwich into fourths and eating two of the fourths. Read on for several freebies about equivalent fractions.

Students can gain experience finding equivalent fractions using models in several ways: Fraction strips, area models, set models, bar / length models, and number lines. Then with a strong understanding using concrete and pictorial models, the student is ready to apply paper-pencil methods to name equivalent fractions. But remember to use the same size whole: As in this picture using pattern blocks, 2/3 of a trapezoid is NOT the same as 2/3 of a hexagon. 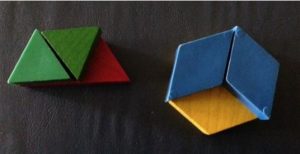 Fraction Strips: If you don’t have sets of fraction strips, here is a free resource Fraction, decimal and percent strips charts via Kim Tran (TPT).  Commercially available strips are also nice. But, with some 1″ strips of construction paper, students can create their own and probably learn a lot about the relationship between halves, fourths, and eighths as well as thirds, sixths, and twelfths in the process of partitioning and cutting them.

TIP:  Make sure students know how to read a fraction strip chart. A couple of years ago I was working with a third grade class and assumed they could readily see that 5/10 was equivalent to 1/2. But after confusing looks, I realized that I needed to physically show them how to follow a line vertically down the chart to find other fractions that were in line (by placing a ruler or long pencil along the vertical line). Another example.  “To find another fraction equivalent to 1/3, find the line at the end of the 1/3 section and trace it vertically down the page to see if there are other fractions that stop along that same line. You should see in the sixth’s line that 2/6 lines up, and in the ninth’s line that 3/9 lines up and in the twelfths line that 4/12 lines up.”

After cutting and labeling strips, then explore equivalent fractions (those with the same size length). Students should be able to generalize that different fractions can used to represent the same area. 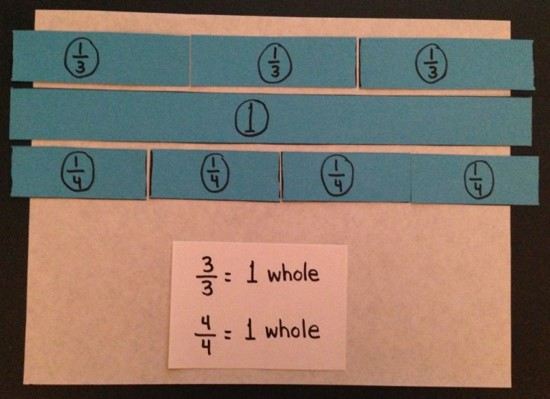 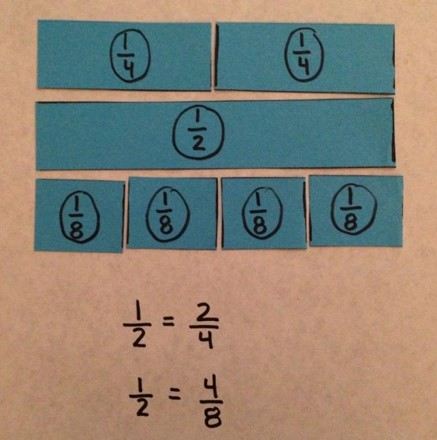 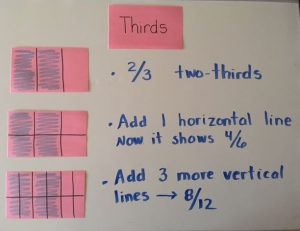 Area models:  By covering or partitioning shapes, students should notice that even though the same area is covered or shaded,  the number and size of the parts can change. END_OF_DOCUMENT_TOKEN_TO_BE_REPLACED