Is division a dreaded topic on your list of objectives to teach? Like many math topics, students have a harder time understanding it most likely because it’s not something they use regularly in their lives. Students should understand why division is useful before they have to start solving division problems. In this post, I will focus on helping students see the relationship between subtraction, multiplication, and division both with concrete objects, pictures, and the partial quotients model. Freebies available below!! 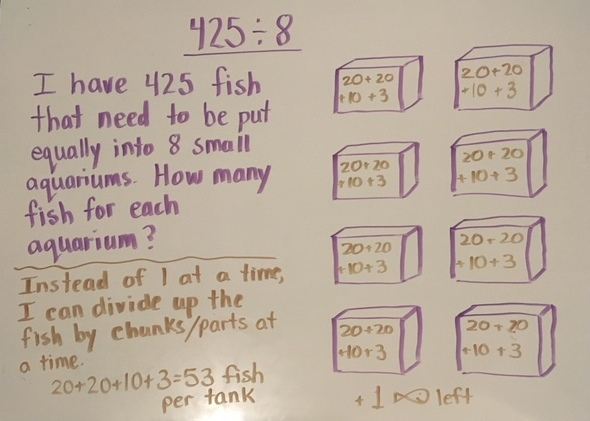 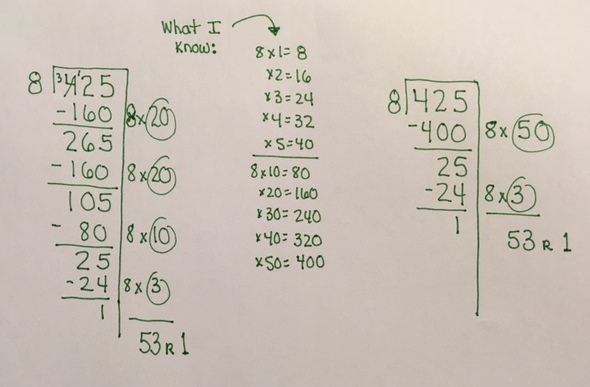 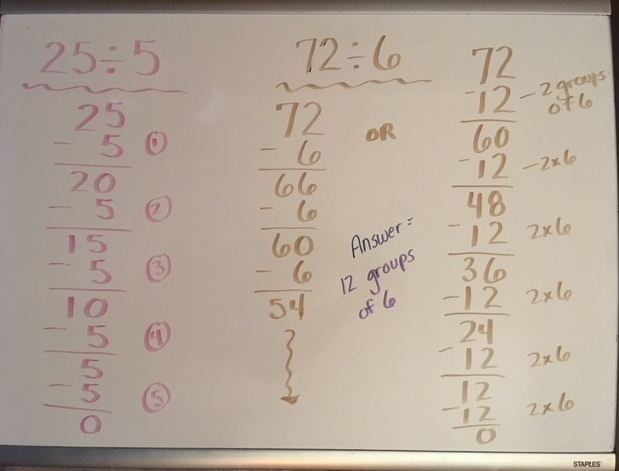 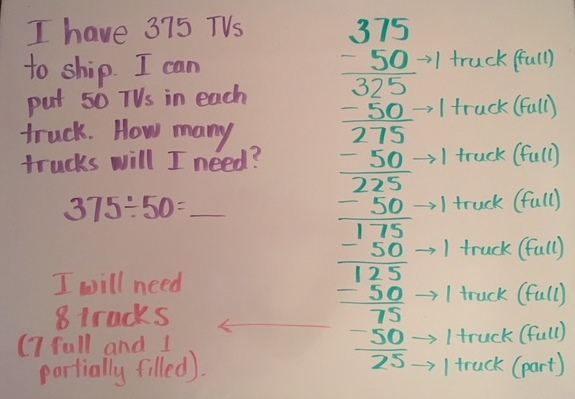 With a larger problem such as 72 ÷ 6, I can again try subtracting 6 at a time until I reach zero. This would take 12 repetitions — not efficient, but still accurate. Could I subtract 12 at a time instead (2 groups of 6) to be more efficient? Or 18 at a time, or 24 at at time? This is the idea behind the partial quotients model I will refer to a little later.

Even first graders in OK have an objective to “partition (fair share) sets of objects into equal groupings.” They have the task of taking a small number of objects and dividing them up so they are in equal groups – using manipulatives and drawings. I would fully expect first graders to utilize the “one for you, one for you . . .” process — repeated subtraction.

Students worked with a partner to divide 60 donuts equally into 5 boxes. They needed to be able to tell me how they went about putting the donuts into the boxes (but it couldn’t be 1 at a time). And . . . I didn’t want the donuts thrown into the boxes. They needed to be arranged so that any supervisor checking on them (the teachers) could readily tell how many donuts were in the box. If they are just randomly arranged, it is too hard to tell at a glance how many there are. This helped students gain more practice using equal groups to make the division process more efficient. 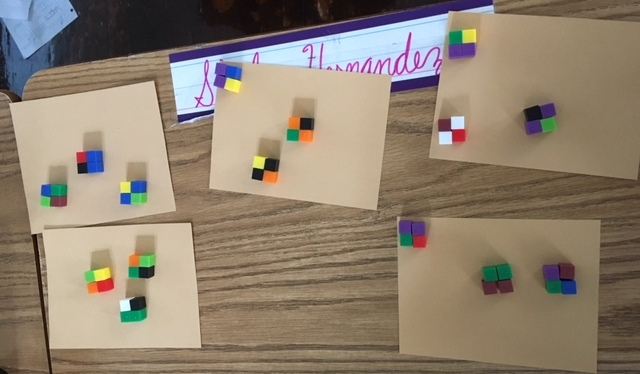 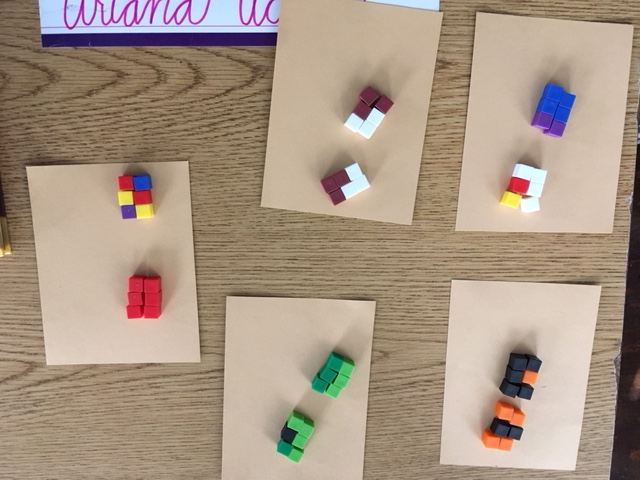 Students worked with a partner to divide 65 donuts equally into ? number of boxes. This time, I specified I wanted 12 donuts in each box. If there were less than 12, I still wanted them in a box. Their job was to determine how many boxes would be needed to box these 65 donuts. I gave them 3 “boxes” to start with. If they needed more, they had to get them from the storeroom (teacher table). This way they had to determine each time they needed another box. I chose this problem because it is a common dilemma with problem solving. If I solve it mathematically, I get 5 with a remainder of 5 – but with this problem the answer would actually be 6 because every donut needs to be in a box. There will be 5 full boxes and 1 box partially filled with 5 donuts. 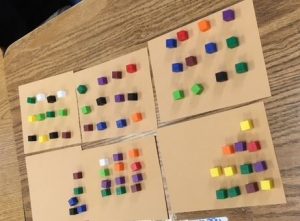 Again, I reminded them that donuts need to be arranged neatly in their boxes so the supervisors could check that there were 12 donuts in each filled box. A small number of students were holding their extra 5 donuts wondering what to do with them. All I had to do was ask, “Are you going to just hand the customer the extra donuts and expect them to hold them in their hands?” No – every donut must be in a box.

Now here is how we related the above problems mathematically to the partial quotients model. 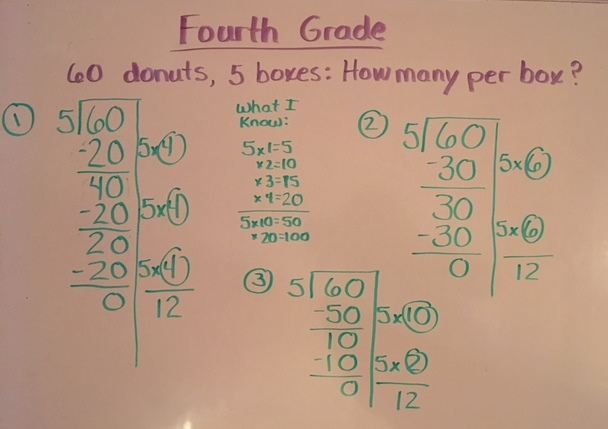 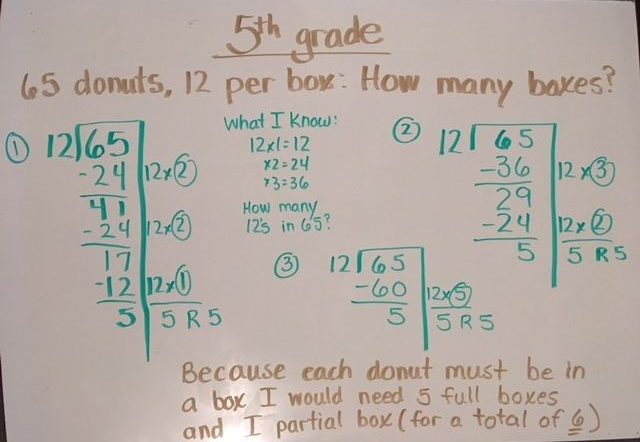 The partial quotients model allows students do solve a long division problem in smaller known chunks. I believe this is a helpful model, especially when students do not know all of their related multiplication facts. They can use the facts they know to subtract a little at a time. The student who knows their facts (yeah!!) will be able to solve the problem in less steps. The student who struggles some, should still be able to solve – it will just take more steps. If you google or look on youtube, you will see several different versions. I happen to prefer the version where students list a few of the facts they know before proceeding, write the multiplication fact used on the side, circle the partial quotients, and then total them to find the complete quotient. Take time to work through examples with students, and by all means show them different paths to the same problem. Another tip:  Use story problems (either verbal or written) with each problem so students hear good examples of what division is all about. 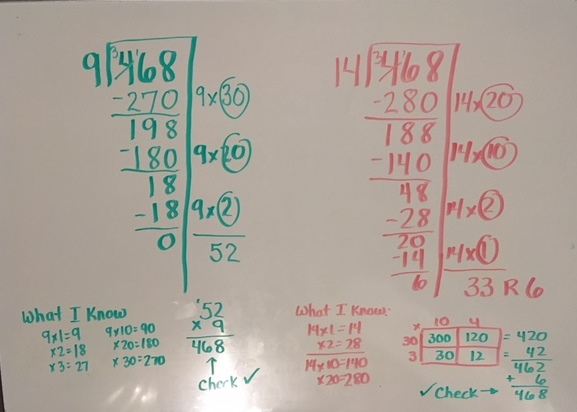 Here are 2 other problems with larger numbers. For a FREE TUTORIAL, click here: Partial quotients tutorial. I have provided step by step instructions and thought processes with numerous examples. Another FREEBIE: “What I Know” chart . This is a resource chart for multiplication facts (x1, x2, x3 . . . x 10, x 20, x30 . . .) to help when doing partial quotients problems.  The first page is blank for students to complete. The second is for teachers because it has the answers.